rymdkapsel (Android, iOS, PlayStation Mobile, soundtrack) by grapefrukt is a minimalist space strategy game that takes most of its cues from the tower defense genre. It takes 60-90 minutes per game.

I came out of the protein vats right before wave 8. Back then we were still counting. We had just discovered the first monolith and needed as many hands as possible: to run the generators, to decipher the ancient messages, to guard the path to the slab itself... And to run the kitchens. That was my job.

Up into the early 'teens it was a good deal. Central Planning had the foresight to make it a short walk. I'd fill up a bag of vege-goo and drag it across the hall to the kitchen. By the time I got there the last bag I dropped off would be fully processed into a chem-cake. Sometimes a construction worker would drop by and requisition it to patch up the bio-interface somewhere else. If not, I took it to one of the birthing quarters and watched the vats do their work. It was always great to help someone new learn their way around the kapsel.

Everything changed mid-14 when the researchers came back from the monolith crowing. During a routine scan the artifact had forced a signal back along the EM freqs they were using to examine it. It fried their scanners and shook the whole station, but within minutes they'd re-jiggered our extractors to work twice as hard. They couldn't explain how they did it - or they could, but no one else could understand the explanation.

They also told us about the other three they'd found on the map.

Backed by our new processing facility we started expanding outwards. We strip-mined the local system and when the well ran dry we ripped apart the well itself. Everything, all the matter, fashioned into ad-hoc corridors, weapons arrays, and more vats for more workers. Endless workers. Anything to get the secrets of the ancients before someone else did. My job? The same as always. Goo from the garden to make cakes in the kitchen to fill vats in the quarters. Hell, in the rush sometimes it didn't even make it to the vats - techs would run by and snatch it from the hopper without even asking. Even when they didn't, by the time the worker popped out I was off to the next room. There was always more goo, more cakes, more vats.

With the remaining extractors spread out our defensive network was weak in some areas of the kapsel. Old weapons were decommissioned, old soldiers re-garrisoned closer to the most important research. We started taking casualties. It didn't matter. Goo to cakes, cakes to vats, just this time it was the second, third, fifth time we'd fill them. More room for people; more weapons for people; more work for people; more people.

The next monolith we reached gave us the schematics for a signal jammer. The next, a new program for our laser targeting systems. Finally the last one unlocked its secrets - a retrovirus, giving us legs that keep running, arms that don't tire. Relentless efficiency.

Those damned rocks. They weren't libraries. They weren't weapons caches. They were waste disposal. The ancients fashioned them as locks to keep us out, not puzzles to solve. Prisons to hold science no one could use responsibly.

It's 27 now. Or maybe 28? They're coming too fast to keep track, alarms never-ending. I'd thank the stars we don't need to sleep anymore, but there aren't any stars left. We turned them all into goo. Goo to cakes, cake to vats. Vats to people. No more weapons for people - now it's people for weapons. Even I can't make them fast enough. And now they're all gone. Now the alarm. It's finally my turn in blue. 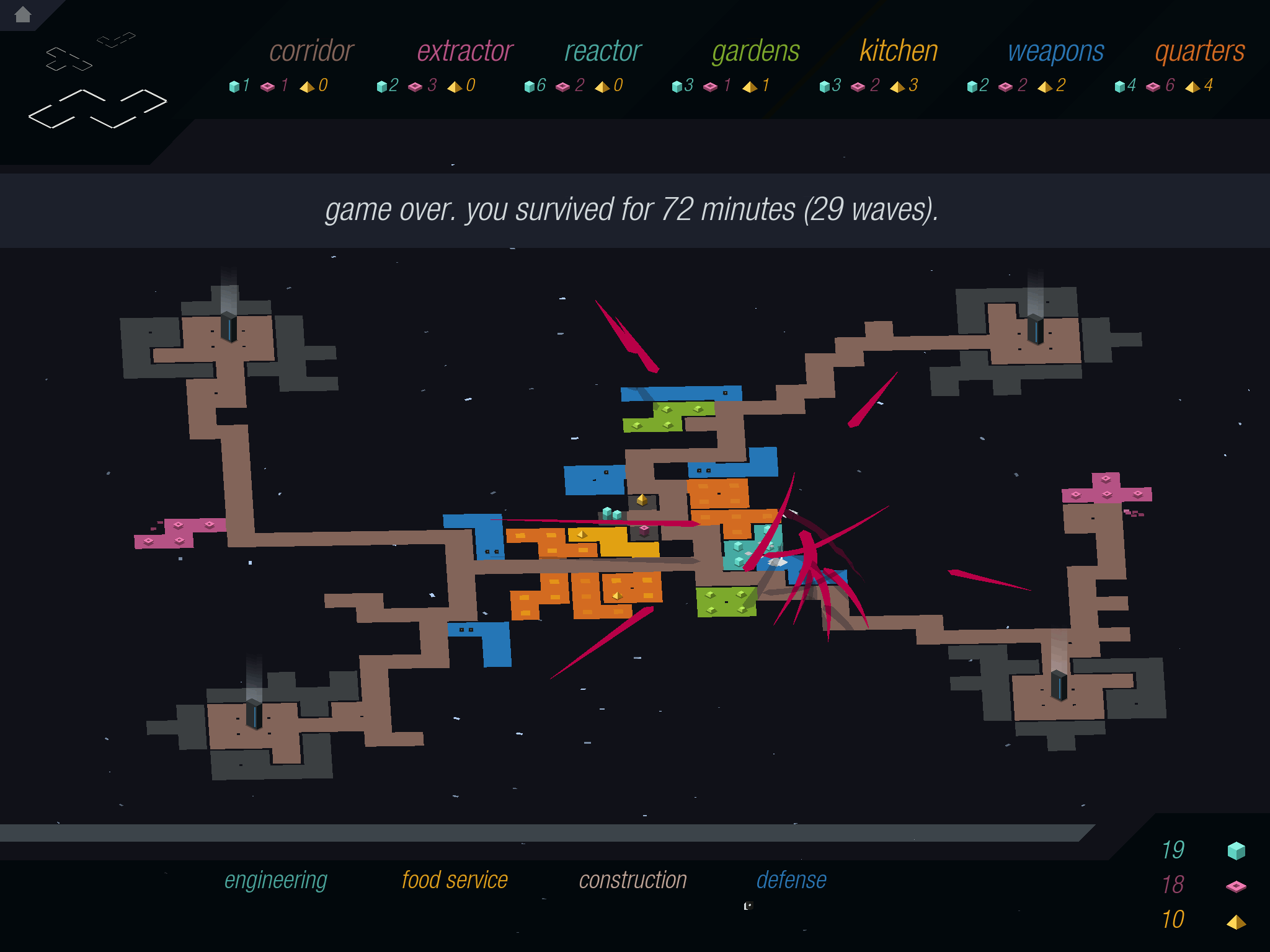 I've played rymdkapsel several times now, and no matter how I build the station - sprawling with several production areas or tightly-packed fortified center, a caution extension towards the monoliths or a mad approach and retreat in the open - the game ends the same way.

Two ╻s holding the line, and one running desperately from the garden to the kitchen to an empty room, making more doomed soldiers as fast as its experimentally-modified appendages can. And eventually, that one must stop as well.

In most RTS/TD games, your loss is marked by the destruction of your base or some critical buildings. But often the game continues on, and you can use your hero avatar or your remaining units to make a futile but narratively satisfying last stand. In rymdkapsel only you can destroy your buildings. At the end of the game you will probably start destroying the outer ones en masse. You will do it to make more minions, with full knowledge they are soon doomed. So the game, for me, becomes a story about growth and (un)sustainability and how we handle its eventual collapse.