I played Liz Ryerson's Problem Attic (play online, direct download, soundtrack, other good music). It's an exploratory platformer and will take most players at least a couple hours to finish. It demands relatively high skill to play. (More than most modern platformers, less than Super Mario Bros.)

It made my laptop draw a lot of power and run very hot. This is probably some issue with Stencyl. 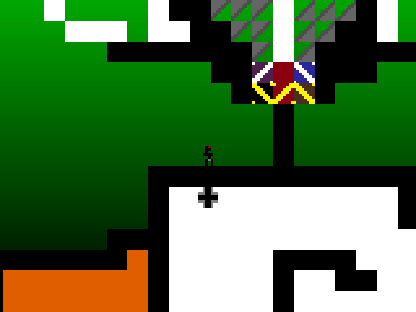 I feel like the game works to defy writing / talking about its contents. Very little is representational. It doesn't offer any text in-game to describe its elements (beyond, for a couple rooms, a pair of letters). Its contents generate descriptors like "the horizontally-controllable crosses" or "the striped alternative foreground" which are meaningless unless you play it, and then you don't need them anyway. It is comfortable being a videogame and uncomfortable being a rules sheet or essay.

Accordingly it asks, but also rewards, a high degree of videogame literacy as you parse out the contents yourself.

There were a few levels that reminded me of other games. One scene in particular dredged up a strong memory of Braid. Several moments were reminiscent of VVVVVV. The game is radically unlike either of these, though.

I think this is an indescribably important game.

Liz Ryerson says the game is "about prisons," which I see, but there was a more personal touchstone for me.1 I have recurring nightmares of forms and queues and a general fear - not just "dislike" but something more visceral - of bureaucracy. Think of the anxiety you get when walking near the edge of a tall cliff; that's a reasonable comparison to how I feel engaging relatively mundane bureaucratic arms like a post office or bank teller.

In Problem Attic I felt less jailed than lost, in the same way I do in those dreams. The environments hinted at an underlying structure / design / purpose which layers of accreted details and incidentals obscured or broke. Navigating something that at first blush looks like unstructured garbage (or worse, parsing out a structure that turned out incorrect), vomitus of numbers and symbols that withdraw while simultaneously demanding engagement. It was the same feeling I got trying to prepare my taxes or my health insurance forms - a fear of being lost in a system just outside my mental grasp.

As a trivial, early, and easily explicable example: Riding the "enemies" that chase you and shake the screen and play discordant noise is key to solving many of the rooms. The only way to succeed is to engage the system despite your ignorance and its apparent hostility.