I'm playing a ton of Animal Crossing: New Leaf. I don't have a lot to say holistically about it. I'll leave that to Christian Nutt at Gamasutra, and some further insight about what it means for Nintendo vs. what it means for humans from Anna Anthropy's essay at Tiny Cartridge. It's a good game, and a nice game, and cuts broad and deep and expressive, and if you can afford a Nintendo 3DS and the game and you think you might like it, you probably will and should get it.

Like many players I've been rushing to upgrade my house. My main room is at maximum size, as is my second floor, and my left and back rooms have been upgraded. This house is bigger than any I will ever actually own. The rooms all have themes - the left is doubling-down on balloons for HHA points; the back is a music studio full of instruments; the basement is a display for my mask collection.

But actually, the room I've spent the most time organizing is my right-side room, and it's still 4x4. 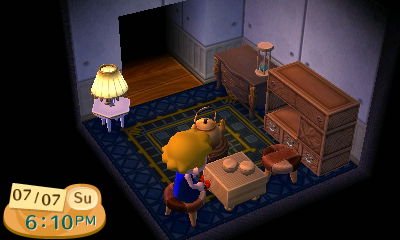 For a game with a reputation for being laid-back and rustic Animal Crossing play is often rushed and concerned with growing, expanding, filling, saturating. This room is a slight push-back against that. It's as small as it can be and the pieces in it, though carefully curated, are also haphazard. The desk is "rococo" but the room lacks ostentation; the lamp "regal" but most of the furnishings are cheap; the stools "modern" but there's no sign of the machined lines and precision bevels we associate with a modern aesthetic.

Despite this mixture the room remains cohesive, cozy, and my main design goal, fictionally functional. 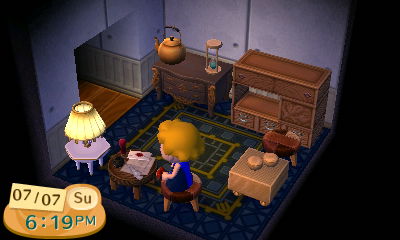 Many rooms in New Leaf are designed as set-pieces. Christian's 7-Eleven is a good example here. I don't want to denigrate this kind of design in any way - I'm working on rooms like this myself! - but there's also something about it that rubs me the wrong way. Do you really want an orchestra in your house, or a dinosaur, or a 7-Eleven? What's the role-play going on here - you're playing a fictional character opening a 7-Eleven? You're playing a fictional character playing at running a fake, toy 7-Eleven? The character is "you" playing at running a fake 7-Eleven? All the answers I have bring forward awkward inconsistencies; does the consistency matter at all?1 Even the rooms that are not "play rooms" look more like an IKEA catalog than a lived-in space.

I don't have an answer. I still enjoy doing it at the same time I wonder what, if anything, the play is doing to me. 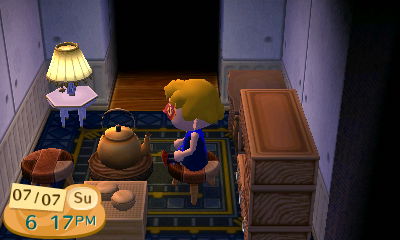 This room rejects that view of what an Animal Crossing room "should" be. You can do things in it, not in the sense of "it has lots of interactable objects," but in the sense that you can invite someone in for tea, or a game of go; you can turn on the lamp and pull out the chair and write a letter at night. The game's surface promise of a "virtual life" can occur in this room. It's imbued with the purpose of human living, not theater or bragging. Its composition is dense, suboptimal, and ad hoc. 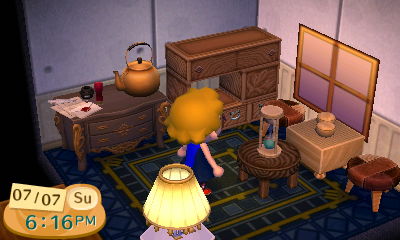 Plainly though, that's a lie. It's just as considered and unnatural as any of the other rooms. The "human living" that happens is still only theater when your "human" has no material or psychological needs. The honest natural state of an Animal Crossing room is a pile of fish and bugs and twelve kinds of chairs you're worried you won't be able to reorder later.

But no one - not the HHA, not other villagers, not us - is comfortable with that, either.